After your examination, obtaining a medical history and planning your operation, a preoperative examination follows. Eyelid surgery is usually performed in the operating room. Rarely in people with good physical condition and young age the upper eyelid surgery is done in the doctor’s office.

Eyelid surgery is designed to remove excess skin and remove or reposition the fat that creates the bags. The “bags” we see on the lower eyelids, but also many times on the upper eyelids near the nose, are actually fat hernias. It is the fat that is normally located around the eye which starts to project forward when the membrane that holds it relaxes.

In some people this membrane is naturally weak and the bags appear very early. This thin fat is very sensitive to fluid retention and so its size can change very quickly. But when it does, only surgery can eliminate it.

On the lower eyelids, the incision is made just below the lashes and extends, if necessary, slightly sideways into a wrinkle. So we remove or reposition the fat and carefully remove the excess skin to stretch the lower eyelid. The scar under the lashes is almost immediately invisible.

On the upper eyelid we remove the excess skin, the fold that is formed above the lashes, and if necessary the excess fat mainly near the nose. The incision is located in the middle part of the eyelid and is therefore hidden when the eye is open.

With closed eyes it may look like a small pink line for a few weeks. But makeup is allowed quickly.

Minimally invasive eyelid surgery with immediate natural result and complete recovery in less than a week.

In eyelid anesthesia it can be neuroleptic analgesia and local or general anesthesia. In the first case, the anesthesiologist administers intravenously an anesthetic that causes temporary sleep during which we perform local anesthesia.

When you wake up, the whole area is anesthetized and the operation progresses completely painlessly. In the second case the anesthesia is general and the patient has no contact with the environment.

The decision about the method we will use is made after consultation of the patient and the anesthesiologist and depends on his age, general state of health and peace of mind. You will stay with me for a few hours with your eyes closed. After a check of mine, the bandage will be removed and you will leave with your eyes open.

After eyelid plastic surgery, local care begins with cold compresses and ointment. The eyelids swell quickly, which may worry you but the swelling disappears just as fast. Tearing can also bother you for a few days. Three days after the eyelid plastic surgery, you will come to remove the stitches of the lower eyelid, after previously putting a lot of ointment which makes the procedure painless.

The upper eyelid sutures will be removed three days later. Then you can use cold compresses that accelerate the absorption of swelling and bruises, commonly bruises. The face is very rich in blood vessels and reacts strongly to injuries.

Eyelid plastic surgery, even when done delicately, is an injury. This surgical wound manifests itself in two ways: bruising and swelling.

You will not be unhappy in the end if you have realized that this surgery does not completely remove the wrinkles in the outer corner of the eye and that it can eliminate all but some of the small wrinkles of the lower eyelid that have been created for a long time. The stretch we do is moderate because it is better to have a few small wrinkles than to deform the eyelid. This operation gives us a stable result for many years. A second operation is possible and does not cause any problems, although it is rarely necessary. 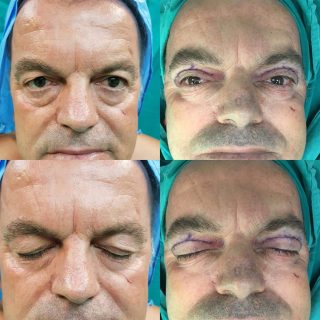 From right to left immediate postoperative image without bruising (bruises). 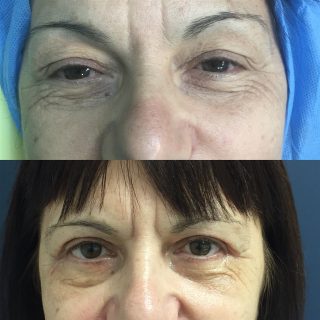